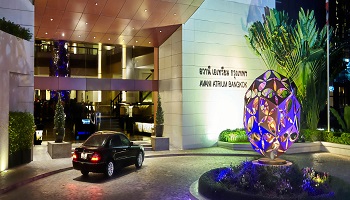 1. Get on Route 7 in Khlong Prawet district. Bangkok from Suvarnabhumi Street 2
• Head west on Airport Road 2 toward Suvarnabhumi 5
• Use the right 2 lanes to keep right
• Use the right 2 lanes to turn slightly right
• Use the left 2 lanes to take the ramp to Pa/Kanchanaphisek Road/Bangkok
2. Follow Route 7 and the Si Rat Expressway to Bangkapi. Take Exit 2-01 from the Si Rat Expressway.
• Merge onto Route 7
• Keep right to continue on Si Rat Expressway
• Use the left lane to take exit 2-01 for Rama IX Road
• Keep left at the fork, follow signs for Road
3. Take tendering Diamond Road to Road / New Petchburi Road.
• Continue straight
• Turn left onto Diamond Road Rising
• Use any lane to turn left onto Road/New Petchburi Road
• Make a U-turn at Prom pong/Phetchaburi street 38/1
• Destination will be on the left

The Bangkok city proper covers an area of 1,568.737 square kilometres (605.693 sq mi), ranking 69th among the other 76 provinces of Thailand. Of this, about 700 square kilometres (270 sq mi) form the built-up urban area. It is ranked 73rd  in the world in terms of land area by City Mayors.The city's urban sprawl reaches into parts of the six other provinces it borders, namely, in clockwise order from northwest: Nonthaburi, Pathum Thani, Chachoengsao, Samut Prakan, Samut Sakhon and Nakhon Pathom. With the exception of Chachoengsao, these provinces, together with Bangkok, form the greater Bangkok Metropolitan Region.

The city of Bangkok is locally governed by the Bangkok Metropolitan Administration (BMA). Although its boundaries are at the provincial (changwat) level, unlike the other 76 provinces Bangkok is a special administrative area whose governor is directly elected to serve a four-year term. The governor, together with four appointed deputies, forms the executive body, who implement policies through the BMA civil service headed by the Permanent Secretary for the BMA. In separate elections, each district elects one or more city councillors, who form the Bangkok Metropolitan Council. The council is the BMA's legislative body, and has power over municipal ordinances and the city's budget. However, after the coup of 2014 all local elections have been cancelled and the council has been appointed by government on September 15 2014. The current Bangkok Governor is Police General Aswin Kwanmuang, who was appointed by the military government on October 26 following the suspension of the last elected governor M.R. Sukhumbhand Paribatra.

Bangkok traces its roots to a small trading post during the Ayutthaya Kingdom in the 15th century, which eventually grew in size and became the site of two capital cities: Thonburi in 1768 and Rattanakosin in 1782. Bangkok was at the heart of the modernization of Siam – later renamed Thailand – during the late 19th century, as the country faced pressures from the West. The city was at the centre of Thailand's political struggles, throughout the 20th century, as the country abolished absolute monarchy, adopted constitutional rule and underwent numerous coups and several uprisings. The city grew rapidly during the 1960s through the 1980s and now exerts a significant impact among Thailand's politics, economy, education, media and modern society.

The Asian investment boom in the 1980s and 1990s led many multinational corporations to locate their regional headquarters in Bangkok. The city is now a major regional force in finance and business. It is an international hub for transport and health care, and has emerged as a regional centre for the arts, fashion and entertainment. The city is well known for its vibrant street life and cultural landmarks, as well as its notorious red-light districts. The historic Grand Palace and Buddhist temples including Wat Arun and Wat Pho stand in contrast with other tourist attractions such as the nightlife scenes of Khaosan Road and Patpong. Bangkok is among the world's top tourist destinations. It is named the most visited city in MasterCard's Global Destination Cities Index, and was named "World's Best City" for four consecutive years by Travel + Leisure magazine.

The city's formal international relations are managed by the International Affairs Division of the BMA. Its missions include facilitating cooperation with other major cities through sister city agreements, participation and membership in international organizations, and pursuing cooperative activities with the many foreign diplomatic missions based in the city.